No one loves Ernie more than I do, so no one is more disappointed to hear the news that he won’t be playing at Bay Hill than me. Sniff…

According to Els’ management company, he was tired and needed rest before the Masters.

A lot of people are quite critical of Ernie and I’m not really surprised. They probably just look at the surface (he won one week, he missed the cut the next, so he quits). 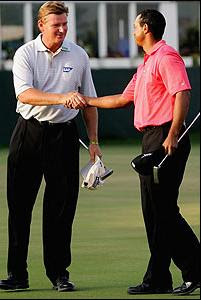 But I think there must be more to it. When Ernie shared publicly the challenges he faces as a father of a severly autistic son, I can only imagine how emotionally exhausting that was for him. And it probably put a lot of stress on the family being in the public eye like that. Bay Hill is a big tournament and maybe he wants to escape the media for a little while.

So, as a huge fan, I’m going to give him the benefit of the doubt. But I do wonder if he withdrew from the tournament because he just doesn’t feel ready to take on the Tiger again.