Okay…I know I know…this post isn’t really all about golf. But golfguys and golfgals do like other sports too. Me….I am a big Seattle Mariners fan and I love Ichiro. So when I saw this story in the Seattle Times, I just had to share it. 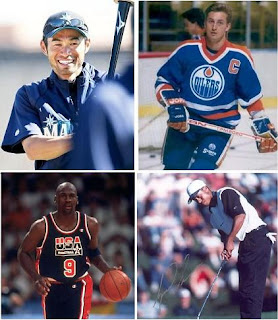 Ichiro to me is the Michael Jordan/Wayne Gretzky/Tiger Woods of baseball. There is a magic about him when he steps up to the plate. He has the best arm in baseball. He makes catches no one else even tries to reach. He runs faster than spit!

So what’s the secret – how do great athletes just seem to be in a league of their own? Apparently, they have “very fine prefrontal cortexes”. Well, at least Ichiro does, according to Dr. Kenichiro Mogi.

For 70 days over three different spans of last season, a four-person, one-camera crew followed Ichiro’s every move, trying to discern his professional methodology. The result was a TV show about Ichiro’s meticulously crafted daily routine of preparing for a game. It’s rather fasinating. I’ll let you read the story to find out why “lunch” is so important to him. It is interesting how he follows the same routine every day – a ritual that lets him “fine-tune his brain state so that he can concentrate fully on baseball.”

Another interesting tidbit…Ichiro can actually report on his own internal feelings in an accurate language. According to Dr. Mogi, “In order to do that, you need to have metacognitive abilities – all related to that “fine” prefrontal cortex in his brain.

But what surprised me the most (and Dr. Mogi) was that according to Ichiro, “He’s felt no sense of accomplishment to this point in his career because his records have been achieved from what he perceives as a deficient state.”

A “deficient state”…Does this sound like Tiger Woods or what! The best in the world are never satisfied, no matter how successful they are. How can they be happy? Nothing is ever good enough. I guess that’s a topic for another post…

Anyway…maybe this “feeling” megacognitive is what made Gretzky know where the puck would be, what gave Jordan the instinct to know where the ball would end up, and Tiger the ability to feel putts go in that look impossible to everyone else.

Whatever it is…it’s magic to watch and I can’t wait to see Ichiro pull a rabbit out of his cap at the opening game on March 31st and watch Tiger dazzle the crowd at the World Golf Championships this weekend with yet another impossible putt.