Golf really is a gentleman’s game

Yesterday I congratulated Trevor Immelman whole heartedly on his Masters win. What a wonderful display of talent and dedication! I was almost afraid he’d lost it on 16 at the end, but he proved that he is not a quitter and bounced back to finish at 8 under par – 3 shots ahead of 2nd placed, Tiger Woods. 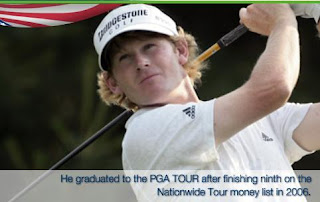 But the stage today goes to a wonderful young man who proved that he is a Masters winner, even if he didn’t take home the green jacket. There is no doubt in my mind that Brandt Snedeker will win a major in the next 2 years. I think he is that good and that deserving.

Not only did he prove this week that his game is ready, Brandt Snedeker is probably the most likeable player you could ever want to meet.

That always-present smile of his (even after a rough break or bad shot) is what keeps me glued to the TV when he’s playing. His sportsmanship makes me want to point the kids his way and say, “Hey guys, come see a real sports hero!”

Golf has always been considered a “gentleman’s” game, but with the swearing on camera, the smashing of clubs, the temper tantrums, the spitting in cups, the trash talking in press conferences and in the media, some of us have started to wonder ‘where have all the gentleman gone?’ 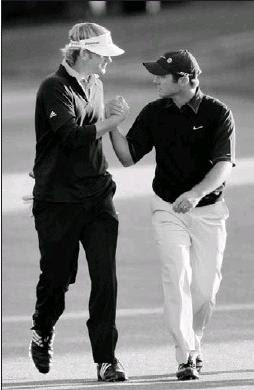 But then you watch Brandt play…you watch him smile even after a bad shot…you watch the way he treats his fellow competitor on the 18th hole at Augusta…you watch him in the post round media centre and you say…”Yes, golf is still very much a gentleman’s sport and here he is…right here.”

Brandt had a great week – he just had one tough afternoon. But did you see the other scores out there from players who have been in the game a lot longer: Flesh shot +6, Paul Casey +7, Jim Furyk +5.

And what about those veterans who didn’t even make the cut? Sergio, Ernie, Freddie, Luke, Steve Stricker – I was shocked at how many of the so called greats of the game never made it to Sunday.

“Pretty phenomenal, to be (on the Nationwide) two years ago, struggling to be a professional golfer, and to be here, crying like a little girl in front of a bunch of media and 100 million people,” Snedeker said. “I’m sure I’ll be getting ribbed for the next two months about this.”

Brandt, you have nothing to be embarrassed about. You gave it your all and you should be proud of yourself. I hope the media and other players are as gracious and honorable as you are and give you a hug, not a ribbing. I know you’d do it for them.

As this reportered shared, “As Snedeker pulled his visor down on his forehead and held a towel to his red-rimmed eyes, a Masters official ended the press conference by thanking him for a great week.”

I wonder who that Masters’ official was. Whoever he is, he just proved to me that maybe there really are a lot more gentlemen left in this game than I thought. MCCLATCHY AUGUSTA, GA. For three days, Brandt Snedeker strode around Augusta National with a smile that was as omnipresent as his wavy blond hair and white Bridgestone visor. But the lasting image of Snedeker from the 72nd Masters will be one of the…read more…

Tech Tags: Calgary Herald newspaper Golf Weekly
Pamper yourself on Maui! Book your little piece of heaven in golfers’ paradise. Book now at http://www.vrbo.com/424659 and tell them Golfgal sent you!