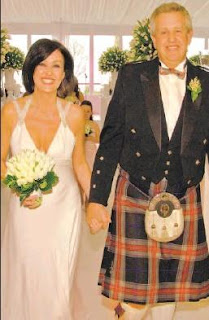 Hmmm…it doesn’t sound like a good start to a “happily ever after” in my books to have your spouse tee it up while you’re teed off that he can’t leave his clubs in the garage even on your wedding day.

Oh well…life with Monty – never a dull moment I’m sure.

On the morning of his wedding to multi-millionaire Gaynor Knowles, Colin Montgomerie played a round with some of his 340 guests at the Loch Lomond golf course in Scotland.

Although most of the wedding and golfing events were very hush hush, those thought to have been invited included singer Robbie Williams, Hugh Grant, Open champion Padraig Harrington, Sam Torrance, Lee Westwood and Paul Casey.

Apparently Monty asked his guests to wear kilts to his wedding. I’m not sure how many complied, but with the winds howling, I hope they didn’t go “au natural” under those skirts. I for one would look away if he bent over to line up a putt 🙂

Well, apparently the new Mrs Montgomerie has a little more influence over Monty that the old – rumour has it that she banned him from taking his clubs on their honeymoon. AFTER CONCEDING that his obsession with golf helped to end his first marriage, Colin Montgomerie might have been expected to turn his back on the sport when he tied the knot a second time yesterday. Not a bit of it. On the very morning of his wedding…read more…

Tech Tags: The Sunday Telegraph newspaper News
Pamper yourself on Maui! Book your little piece of heaven in golfers’ paradise. Book now at http://www.vrbo.com/424659 and tell them Golfgal sent you!