Cavemen – I thought they were extinct, but I was wrong. At least 2 live in California and golf in Vegas.

I just got back from playing 5 days in Las Vegas at 5 different courses. Heaven! Well, it was on some courses. But on others, it was a good walk spoiled. Not because the course was bad….on the contrary…all the courses were in good shape and the weather couldn’t have been better. The problem was a lack of golf etiquette by 2 other golfers we had the unfortunate pleasure to play with. 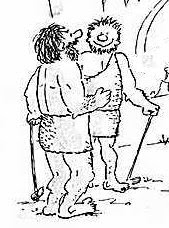 We were paired with a couple of young guys on Boulder Creek Golf Course last week that were completely oblivious to the concept of golf etiquette. And they were obviously not in the “more women should play golf” camp, if their behavior was any indication. You could tell the minute they laid their eyes on me that they were not too pleased to be playing with a golfgal. One boasted a 16 handicap, which was either completely bogus or he was really off his game. He certainly was off the fairway enough all day.

They talked constantly and paid no attention to what my golfguy and I were doing. Sure it’s fine to “play your own game”, but you need to pay attention to others and respect their game too. They did all the things I really hate, such as:

They never spoke to me, but chatted up my golfguy all day long.

They took off in their cart after they had tee’d off, zipping past the forward tees without a second thought about me still having to hit my first shot.

On the green, one guy kept taking out the pin even if I was off the green without even asking me if I wanted it in or out. What bothered me was he didn’t do that with the two other guys – just me – Ms. Invisible.

When I got home I started looking for websites, books and stories on golf etiquette. I ran across this article recently in the Seattle PI about Jim Corbett, also known online as Mr. Golf Etiquette. Mr. Corbett has been promoting golf etiquette for about 12 years and has a website devoted to his passion for teaching others about proper behavior on the links. He’s written a couple of books on the subject too, including “The Pocket Idiot’s Guide to Golf Rules and Etiquette.” I think I’ll grab a copy and see if he addresses gender etiquette issues. I hope so… I’ll let you know.

I realize that 99.9% of golfers are gentle people, but when you run into that 0.1%, you just want to pack up your clubs and go home. I almost felt like asking those Neanderthals to play through and leave us alone, but I didn’t have the guts. It ruined my game, and it bugs me still that I let it ruin my game.

The good news is that a couple of days later, I had the great privilege to play with two terrific gentlemen. They were friendly, respectful and we had a great time playing together. I posted a review of the course and included their friendly faces in it. It’s guys likes these ex-airforce buddies that make all the jerks seem irrelevant. Thanks Paul and Pete for proving once again that golf is a gentleman’s/gentlewoman’s sport.