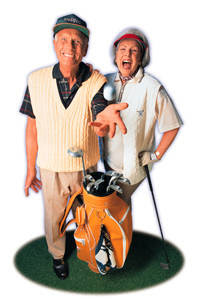 As I started to write about the Wales Open results today, I came across this article and had to share it.

As an avid and fanatical golfer who just can’t get enough of golf, I think I may now know why. I must instinctively have known that if I golf, I’ll live longer. And the longer I live, the more I can play golf.

A recent study in the Scandinavian Journal of Medicine & Science found that playing golf reduces the death rate by 40 percent, equating to a 5-year increase in life expectancy. Five years!!! For me, that’s like 500 more rounds!

The study measured 300,000 Swedish golfers and controlled for factors such as age, sex and socioeconomic status. It also found that the lower the handicap, the longer the life expectancy. Hmmm…how low is low enough to save those 5 years?

Anders Ahlbom, who led the study at the Karolinska Institute in Stockholm, said: “A round of golf means being outside for four or five hours, walking at a fast pace for six to seven kilometres, something which is known to be good for the health. The lower death rate among the best golfers may be due to the extra time they spend on the course.“

He went on to say…”Maintaining a low handicap involves playing a lot, so this supports the idea that it is largely the game itself that is good for the health. People play golf into old age, and there are also positive social and psychological aspects to the game that can be of help.”

And…according to this article, “Research published last year showed that the key to success on the golf course could lie in a happy marriage.” Well, I certainly do agree with that. My golfguy and I play regularly and this week when I shot the lowest score of my life, he was more happy for me than he was for his own good game. I guess maybe that’s why I married him 🙂

AS sports go, it is far from the most strenuous. But golf appears to have significant health benefits, including the ability to make you live longer. A study of 300,000 golfers revealed that they were 40 per cent less likely to die at any given age…read more…