You all know by now what a big fan I am of the European Tour and my fave players include Darren Clarke, Miguel Angel Jimenez, Nick Dougherty, Lee Westwood, Padraig Harrington and so many other greats we see pretty regularly on the PGA as well, like Sergio Garcia and Ian Poulter. And of course, the ever loveable Monty 🙂 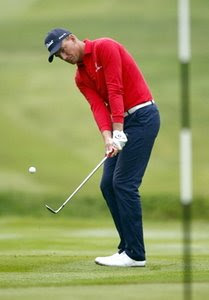 But this weekend, I was cheering for one my new favorite players, Robert Karlsson. The tall lanky Swede is such a pleasure to watch swing a club. Nothing against Mr. Strange, who played very admirably and obviously deserved to win the Wales Open, but Karlsson has caught my eye recently. So I did a bit of research on him in the printed media. I discovered that he’s got some “baggage”. Not that we don’t all have a little, but his is rather bizarre.

According to reporter, Mark Reason of The Sunday Telegraph (Sport), the calm, quiet Swede isn’t exactly what he first appears…

1) Has a very bad temper. Apparently, at last year’s Open, Karlsson attacked a metal railing with his driver. Ouch!
2) He tried to finance a school in northern Sweden and was strangely rejected. Hmmm…who turns away money?
3) Last year he was unfairly portrayed as a member of a wacky sect by a Swedish TV programme, which made him retreat to the edges of the Arctic Circle for a while.
4) Apparently, a week or two ago, Karlsson had been on a two-week fast, spending all night hitting putts while a friend shouted abuse every time he missed. And according to Reason, “Robert relived the moments of conception and gestation before heroically, and presumably metaphorically, forcing himself out of the birth canal. ” Haha…too funny. Reason, you have a way with words!

Anyway, watching Karlsson on TV has been a lot of fun and regardless of what the media says about him, he looks altogether to me on the golf course and he’s now one of my picks for the Ryder Cup.

In the last 4 tournaments, he’s place 3rd 3 times and 2nd once. Time for a win, don’t you think Robert? This bridesmaid stuff is getting old – like your white belt and white shoes – those have got to go – a little too “Herb Tarlek” for me. Only Ian Poulter can get away with matching shoes and belts.

AS ONE of the few professionals to have twice shot 60 in his career, Darren Clarke thought he knew all about the art of low scoring. But as the red figures of birdies and eagles – a fair number of them his own – crowded the scoreboards at Celtic Manor…read more…
Tech Tags: Daily Express newspaper Daily Expresssport
Pamper yourself on Maui! Book your little piece of heaven in golfers’ paradise. Book now at http://www.vrbo.com/424659 and tell them Golfgal sent you!