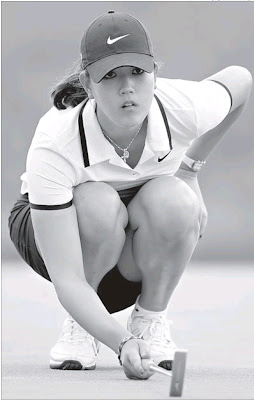 I wasn’t going to blog about Michelle Wie’s decision in play in yet another PGA tour event because the story is soooo old, but I came across this article in SPORT where Leadbetter holds nothing back in his criticism of Michelle’s choice (or perhaps her parent’s choice) to skip the chance to play in an LPGA Major to play with the boys on a 2nd-tier PGA tournament. Why would she do that when she is finally starting to regain some respect in her sport?

Please tell me it’s not the money. Doesn’t she have enough?

Is there something completely out of whack here? I am the first person to say there needs to be more money in women’s sport, but not like this.

Michelle was expected to try to qualify for the Women’s British Open at Sunningdale Golf Club. But because she wasn’t guaranteed a spot, she pulled out of the qualifier and accepted another sponsor’s exemption for the Legends Reno-Tahoe Open at Reno, Nev. It is her eighth PGA Tour event. She’s never made the cut before, but maybe she thinks with a sub-par field she might have a chance. Even if she makes the cut (which I predict she won’t) – it’s a really really dumb idea.

According to Michelle…‘‘There are going to be criticisms in entering this tournament,but I’m just doing what I feel like I want to do.’’ You bet there are lady and the one who should be in your court just can’t stand to watch…

“I’ve put too much time and effort into Michelle to be able to sit by and watch this happening without saying something,” Leadbetter said. “If she doesn’t stick to doing what’s sensible, we could see one of the greatest potential talents the game has ever known going to waste. There’s far too much negative energy surrounding her at the moment. She’s getting slated by players on the LPGA Tour and the men’s tour. She’s going to be like a pariah if she’s not careful.”

I expect we’ll be seeing Leadbetter get the boot very soon by the Wie’s, but I’m sure he’ll be happy to wash his hands of this whole mess.

I think it’s time for a Michelle Wie intervention. DAVID LEADBETTER, the world’s leading teaching professional, yesterday criticised Michelle Wie’s decision to play among the men in this week’s Reno Tahao Open in Nevada. “It’s a shock to me and to her agents that this is happening,” said Leadbetter,…read more… Tech Tags: The Province newspaper Sports
Pamper yourself on Maui! Book your little piece of heaven in golfers’ paradise. Book now at http://www.vrbo.com/424659 and tell them Golfgal sent you!