Highway 18 – Episode 6: Would Bobby or Walter turn over in their graves? 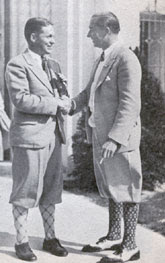 So did you enjoy tonight’s episode of Highway 18? I wonder what Bobby Jones and Walter Hagen would have thought of it – haha. I’m sure they’re rolling over in their graves, thinking, “What the heck has happened to the game of golf!?!

Well, we saw another trivia challenge kick off tonight’s show, which I found a bit ho-hum. I think we’ve done enough trivia on the show, but it was good to see Andy and Parker “not look as stupid as they sound” and come out on top (BTW…that was Parker’s quote on episode 1, not mine :)).

The up and down at Bellair Country Club seemed to be a pretty simple challenge on the surface, but after talking to the contestants, I guess those clubs were next to impossible to hit. Unfortunately, we couldn’t quite see that on TV, but according to Ashleigh K, it took a loooong time to get the ball in the hole for many of them.

The day really got interesting when the teams headed to the site of the 1926 historic match between Bobby Jones and Walter Hagen – Sara Bay.

I was happy to see some real golf and see the players hit some pretty decent shots. And I was really pleased to see Ashley and Ashleigh hold their own pretty well against Jay and Peach.

There was a lot of hype around Peach’s “rule violation” of touching the line of his putt before the show aired, but I didn’t think it was a big deal in the end. He seemed very reasonable about the whole thing.

But…I guess we didn’t see everything that went on behind the scenes that day. I spoke to Ashleigh and Ashley tonight about the episode and they shed some light on things we missed.

BTW…I’ve been hearing (and reading) people question whether the contestants may have known about the “super leg” or other surprises that came their way. Well, I wasn’t there, but I have been assured that the contestants knew nothing about what awaited them, other than the daily contracts they had to sign about each challenge. They had to do that, so that a contestant couldn’t sue later and say “that’s not what I heard”. Other than those contracts, they were clueless about the twists and turns like we saw today with no strike handed out and immunity awarded instead.

The fact that there hasn’t been anyone elminated is just luck of the game – nothing is rigged – what you see, is what really happened. When you see a team play a hole twice or 3 or 4 times, then that’s what happened that day. GC does a pretty good job of including everything it can to present a realistic picture of the day.

Charlotte confirms this in her interview today for us and, as usual, gives us further insights into the show…

And of course, the blog would not be complete without hearing from Jay Reynolds share his views on the loss of hole he and Peach received after Peach touched his putting line. I caught up with him in an airport on his way to the New Mexico Open…

And let’s not forget one of the funniest contestants on the show – Andy Crain. I took a risk and asked him about his Golf “This sucks!” Central experience and giving up his chance to ride in a race car at Daytona. Let’s just say, he was not amused by either, but his southern gentlemanly style couldn’t let him tell me to take a hike 😉

And last, but certainly not least, Raul Cendoya – Nothing gets by this guy!!

If you’re wondering who next week’s surprise guest is that Raul spoke about, it’s Pinnacle Long Drive team member Brian Pavlet. I guess we’ll be seeing some jaw-dropping shots next episode. I also just learned that, yes indeed, someone is going home on Tuesday. Hmmm…Raul and Jameica have immunity. Rob and Charlotte have no strikes so they would appear to be safe. So…it must be one of A&P, A&A or J&P. Who do you think it will be?

I’m glad I’m on this side of the TV given what these teams are going through. So…let’s just sit back and enjoy the race. Next week, someone could finally go home.

So…what did you think of the finale of Big Break NFL? I had a little …