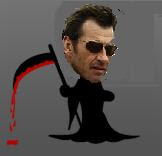 I promised myself I wasn’t going to write anything nasty about Nick Faldo in my blog, even though I’m royally peeved that he chose Ian Poulter over Darren Clarke for his team.

After months of saying that “form” would be vital, he snubbed Clarke, who definitely was in better form having won two events to Poulter’s none.

Now, don’t get me wrong, I’m a big fan of Ian Poulter, but he didn’t deserve the spot over Clarke this year. Sorry Ian 🙁

Yeah, I know, that’s old news now, but I must say in following the media lately about the Ryder Cup, I am amazed at the coverage the captains are getting over the players. It’s like the event is all about them and not the real stars of the game. Even Golf Channel hosted a two hour “Captain’s Challenge”. I have to admit, I did not enjoy that show very much. I am no fisherman and although I like a good game of Pai Gow, watching fishing or someone else play cards [yawn…’xcuse me…] bores me.

Anyway, about not ragging on Nick…The thing is, I don’t have to. His countrymen are doing it for me. Below is one good example. This article was published in the Daily Mail by reporter Paul Howard. I was really surprised at his protrayal of Nick, “the P***k” Faldo, given he’s a Brit. In fact, I’ve been quite shocked reading a lot of the media about Faldo from his home country. So much of it is negative. You won’t see US papers slamming Paul Azinger that way too often.

Maybe that’s why I love these UK rags – they love to stir the pot! 🙂

One of my favorite quotes in here (in case you don’t want to read the whole article) is this one: 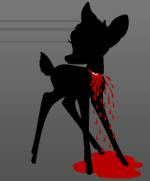 “As the man who shot Bambi by excluding Colin Montgomerie and Darren Clarke, Europe’s captain had already prepared the ground for widespread scepticism about his capacity to detach self-regard from the strategic needs of his players. “ 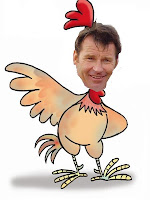 And when Faldo called himself the “mother hen” of his team, I love Howard’s reference to Nick as the “clucking matriarch” – too funny!

But as much as I want to say I’m going to boycott these games on principle, I know that I will be glued to the TV this weekend and will be cheering on my favorites (from both sides of the ocean).

And I’ll cruise through the European papers looking for quotable quotes for my post Ryder Cup rant and rave. TIME to throw the ‘ E’ word at Nick Faldo. Ego: the one human failing that could yet destroy European unity on the bluegrass of Kentucky. Faldo flinched. Then his brain shut down. Hostile question alert. But it wasn’t an ambush, merely an attempt to…read more…

Tech Tags: Daily Mail newspaper Racemail
Pamper yourself on Maui! Book your little piece of heaven in golfers’ paradise. Book now at http://www.vrbo.com/424659 and tell them Golfgal sent you!