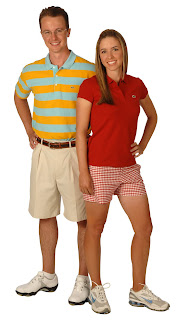 Well, from the first episode to the last, there was never a dull moment on Golf Channel’s Highway 18 (okay, maybe the Trump croquet challenge was a bit lame, but overall, this series was a rollercoaster physically and emotionally).

I watched every episode at least twice because I found myself missing so much. It was a fun and exhilerating ride, not only for the contestants, but us die-hard fans too.

So many times I wondered how the players managed to escape injury and disaster as they played chicken on the highways and drove themselves to the brink of exhaustion day after day.

It was inevitable that this competion would eventually take its toll on the contestants. After watching arguably the best player in the bunch put his arm out of commission last week, I thought maybe things might tone down, just a bit, on the last day. WRONG! That final challenge tonight was brutal to watch and obvious “torture” for both teams.

But Rob and Charlotte proved tonight that nice guys (and gals) can finish first and crossed the finish line with flag in tow (nice touch) to win the $100K in prizes. Congratulations Rob and Charlotte!!!!

Rob and Charlotte were out celebrating with friends tonight, but Charlotte took a few moments to share their victory with all of us who lived vicariously through them on this show…

The Ash’s were together tonight as well to celebrate their amazing journey and I was happy to be able to connect with them and talk about what that last day was like for them both. It was worse than we saw…way worse. But you just can’t keep a good Canuck down!

Now for the 2nd half of the winning team…Rob Campbell…

Jay and I connected Wed AM to chat about last night and as always, he shared some information I didn’t know by watching the show. That’s why I love these interviews!

Finally I got to chat with Peach and get his recommendations on what the GC might like to do for the next Highway 18 to make the show even better.

It was a bittersweet week for me. This is the last time I’ll get to interview all of these great people. I feel like I made a bunch of new friends and I’m going to miss them.

But life has to go on for everyone. Did you know that Rob has a band that recently released a CD? Check it out on http://www.robcampbell.tv/. And Charlotte will continue to pursue her golf career – check out her site and Blingo Ballmarks business which helps pay her way to her Futures Tour events (although with the cash and travel $ she’ll now be able to travel in style on her way to the LPGA.)

Jay will continue to pursue his golfing career and I’m sure we’ll be seeing a lot more of him in the future – he has game and he has determination. Good luck Jay!

The Ash’es will be partying in Vegas soon (I’m not sure that town is ready for them ;)). I know the forums certainly aren’t! LOL!!!

Parker and Andy will continue to make people’s lives just a little more fun by making them laugh. I hope we get to see them again. As they say… laughter is the best medicine for anything that ails ya.

I started this whole series with my first interview with Keri and it grew from there. I wanted to end this ride with some closing words from her.

Gotta get me one of those “Sweet Spot” pink clubs. I look good in pink 🙂 Sounds like Keri has some interesting opportunities ahead and that GC ‘may’ be scouting for a HW 18 -2. I sure hope so.

As for me, there’s no rest for the wicked…next week, I’ve got 4 interviews lined up after Big Break Michigan – the fun never stops on Golfgal’s blog!