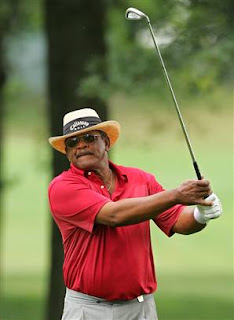 Could the timing be any worse? Tonight Golf Channel airs a documentary called Uneven Fairways, hosted by one of my favorite actors, Samuel L. Jackson.

And just two hours ago, Reuters reported that 13-time winner Jim Thorpe, another favorite of mine on the Champions Tour, has been charged with failing to pay $1.6M in federal taxes. According to the report…”Thorpe failed to file personal income tax returns on time and to pay his taxes for 2002, 2003 and 2004. In addition, they said he failed to file a corporate tax return on time for his company, JLT Inc, in 2003.”

Jim Thorpe is in deep trouble. He could be sentenced to 7 years in prison and a $3.2 million fine. Oh my!

How does this happen? Thorpe has an incorporated company; he’s made $13M in his career. He must have an accountant. Where is he/she in all this mess? Nope, this doesn’t make any sense to me.

I am sure we’ll hear more about this over the next few days, but this is really sad and couldn’t have happened on a worse day.

Some might almost wonder if the district attorney did it on purpose. Obviously Thorpe’s been investigated for some time now. But is it just coincidence that the DA filed charges on the day Uneven Fairways was being debuted?

I don’t believe in coincidences. Something stinks here!
Golfgal Craig Bowen’s cell phone rang, and despite being in the midst of an interview, he felt compelled to answer. It’s a normal reaction when you’re working diligently to promote a documentary that has consumed your existence for more than a decade. And…read more…

Tech Tags: Chicago Tribune newspaper SPORTS
Pamper yourself on Maui! Book your little piece of heaven in golfers’ paradise. Book now at http://www.vrbo.com/424659 and tell them Golfgal sent you!