Turnberry Ailsa – Where golf memories are made 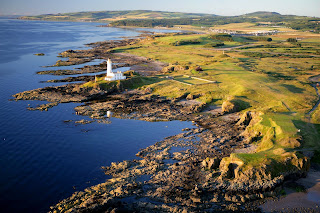 Claimed to be ‘the finest links golf course in the world’ by Colin Montgomery, Turnberry Ailsa finally returns to centre stage this week hosting the British Open for the 4th time since its “coming out party” in 1977. And what a coming out party it was.

I can’t count the number of times I’ve watched footage of Tom Watson holing that 60 foot putt on the 16th hole to tie Jack Nicklaus, and then go on to beat the Golden Bear by 1 stroke and capture his 2nd Claret Jug (his first was at Carnoustie Golf Links in 1975). 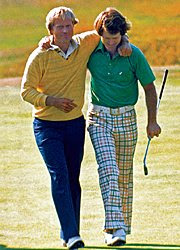 That Duel in the Sun will be remembered forever, but what about Turnberry itself? Since I really didn’t take up the game until a few years ago, I wasn’t as familiar with Ailsa as I was with other, more resent, Open venues, so I decided I’d talk to my friend and colleague, David from the UK – a 14 handicapper who’s played Ailsa twice. After hearing from him about the first time he set his eyes on that course, I feel like it’s become a memory for me as well…

It was not long after the last British Open was held in Turnberry that David and his golf buddies (regional winners of a British Telecom golf competition) set off to play the Ailsa course with some pretty high stakes – they were one of 40 teams vying for 6 spots to play the finals in Sotogrande Spain, all expenses paid.

They arrived to find themselves in in what David calls “golfing majesty”. Not a stranger to playing other famous Open venues (he has played Hoylake, St Andrews Old Course and Royal Birkdale), David described his feelings at Turnberry as being “in awe”. Not only was the hotel a 5 star treasure, the course was in fantastic condition, with breathtaking vista views.

Perhaps it was that sense of wonder that that caused him to perform ‘awe-fully’ on the practice range before his round. What made it even worse was that he had an audience behind him – European PGA tour pro Malcolm Gregson was standing there watching and couldn’t help but speak up as David headed to the first tee with these words of comfort, “It’s going to be a long hard day for you today if you are going to hit the ball like that.” Gee, thanks Malcolm!

Well, despite Mr. Gregson’s less than encouraging send off, David had one of those wonderful experiences where he woke up on the first tee and drove his ball straight down the fairway, delighting himself, his team mates and especially his caddie who watched him duff shot after shot on the warm up tee, thinking it was going to be the longest day of his life. A short iron into the green and suddenly life was very very good.

They had a marvelous day, despite the steading downpour of rain. And when they reached the 9th hole, they were ready for the much-talked-about views of Ailsa Craig – a volcanic rock that rises over 1,000 feet from the middle of the Firth of Clyde. 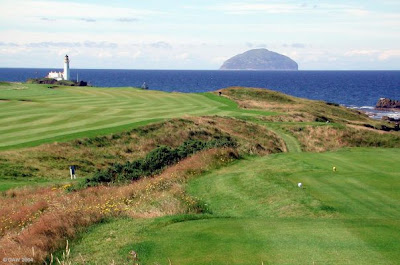 At this point, David’s caddie stepped up to give his little speech, “If you can see Ailsa Craig, it’s about to rain; if you can’t see it, it’s already raining.” I wonder how many times he’s said that over the years 😉

Anyway, no amount of squinting, could bring Ailsa Craig into view for the team so they sadly moved on to the 10th tee.

Now, the 10th hole has changed quite a bit since David played. The redesign was intended to bring the coastline further into play and create more of a risk/reward shot for players looking to cut off the corner of the fairway. 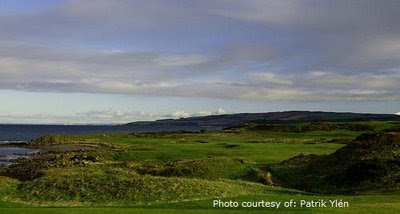 Today it requires at least a 200-yard carry off the tee. I sure hope that was from the tips or I’d be packing my bags for home by now.

Some say this stretch of holes 8 through 10 is Scotland’s Pebble Beach, but with its spectacular untamed landscapes untouched by civilization, and its romantic history, I’d say Turnberry has it one up on the home of the 2010 US Open. But of course, I haven’t played either, so I better hold my judgement until I can compare them first hand. Let me just make sure they are both on my bucket list. 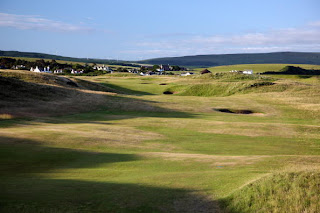 Regardless of the many lost balls in knee high rough and having to slog their way through the links, the team was doing pretty well until the 17th, where David described his performance as very ‘keystone cop-like’, “I jammily escaped the bunker on the hillock 100 yards short right of the green only to find it lodged above the bunker leaving me an impossible stance. My clumsy swing at it only succeeded in dislodging it so that it ran back into the bunker swiftly followed by yours truly and my clubs.” Oh how I wish I had a picture of that!

Regardless of the “cock-up” at 17, David’s team was quite excited dripping their way into the clubhouse with a final score of 91. Now in the Stableford (best 2 ball) format they were playing, that was a pretty good score and they were fairly confident they would be in the top 6. But the magic of Turnberry seemed to be focused on a different foursome that day who carded an incredible 102. Commentator, Peter Alliss, who was giving the after-dinner speech, was quite nonchalant about the score saying, “Look, it’s not that difficult to do this. All you need to take is 4 single handicap golfers and play them as 18, 19, 20 and 21 and your job is done!” Haha…say no more – say no more!

Almost twenty years later, David still vividly remembers the course, the views, the clubhouse, the hotel and every shot. He’s played Turnberry since that eventful day, but the memories of his first time on Scotland’s coastal wonder have burned themselves into his brain and his heart. I guess what they say is true, “It’s never quite as good as the first time.”

I can’t wait to experience for myself one of Scotland’s golfing treasures for the first time. And they do say, 3’s a charm, so… Haste Ye Back, David, and I’ll meet you at the first tee!