Meet Big Break Disney’s Kevin Erdman – if he’s as good a golfer as he is a husband – Watch out!

Only 1 week until Big Break Disney airs its first episode. Are you as excited as I am? The competitors look very impressive. And this will be my first chance to interview an all male cast. Woohoo!

To kick off the series, I thought I’d introduce you to one of the contestants that really deserves his big break – Kevin Erdman. Check out Kevin’s bio on the Golf Channel site and then you’ll know why.

Kevin put aside his pro golf career to caddie for his wife, Big Break Ka’anapali’s Courtney Erdman, on her quest for her LPGA card. Wow. I don’t know too many people who would do that for their spouse. Courtney and Kevin have sacrificed a lot to chase her dream, travelling the country in their “love shack” and sleeping in parking lots to save pennies. 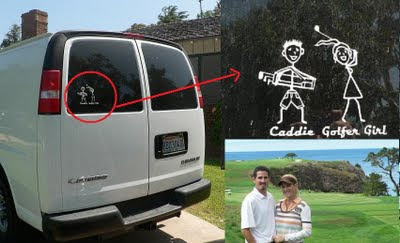 It’s been a tough road, but when you talk to them, they sound like they would do it all again. Yes, Courtney and Kevin are an amazing couple (Maybe Greg Norman and Chris Evert should take marriage counselling from them!). I wish they had competed together on Big Break Michigan as a team. That would have been awesome to watch.

Anyway, I had the pleasure of chatting with Kevin about his experience on Big Break Disney last night….

It sounds like Big Break Disney will showcase some pretty interesting characters for us, along with some unusual challenges. I can’t wait to see the competition at the non-golfing venues like Main Street U.S.A., Disney’s Wide World of Sports Complex and the Walt Disney World Speedway. It will be like “Big Break meets Highway 18”. How cool is that!

So meet me back here next week, when I’ll be interviewing Kevin again and a few of his rivals after the show’s debut to hear their first reactions to Big Break Disney.