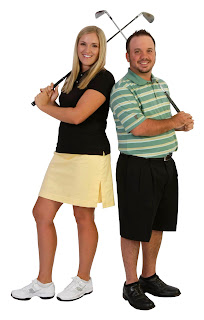 Well, tonight was the first Big Break X Michigan elimination and I have to saw I was pretty shocked to see Andrea and James go home.

Everyone I spoke with on the show said they were one of the strongest teams, and yet they struggled as a team to get it done when they needed to. They say golf is a lonely sport – maybe the best players are used to playing alone and team play is tougher for them. I don’t know about that, but I was sad to see them go so early, having gotten to know Andrea over the last few weeks in our interviews. I’ll be speaking with her tomorrow and get her thoughts on what went wrong, but tonight the show belows to Michael.

From Meltdown Mike to Mr. Layer Precision, Michael was on fire tonight and played “team golf” to perfection. He and Sherri obviously worked on that part of their game overnight. I caught up with him right after the show to get his thoughts on what it was like being in his first elimination…

Amber also joined us tonight, although she and Robbie were on easy street sitting in the BMW Zone all day. It was good to get their perspective, however, on the Big Whopping Flop Shot Wall competition and also what it was like watching the first elmination challenge from the sidelines. Sometimes the immune offer insights we just don’t see in edited TV…

Caught up with Andrea Wed AM and, as always, she was gracious and friendly. A tough night for her and James, but she handled it very well.

I am very happy Andrea has agreed to continue with the interviews each week and give us an inside look at the post-elimination life she and the others live as they watch the show progress.

Finally today I had the pleasure of interviewing Sally Dee for the first time. Did you know she was 75th on the LPGA in 2000 but had to retire because of an elbow injury? And you’ll die laughing to know what she did in 2002 – I’ll let you listen for that…

314 yards got Sally into the semi-finals at the Re/Max World Long Drive Championship this week. She’ll be going for the finals tonight – let’s send good thoughts her way. 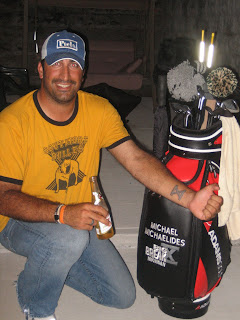 Hey, I got a picture of Mike’s tatoo. 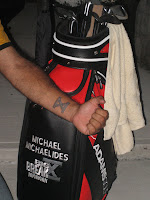 I’m not usually a big tatoo fan (I like the temporary ones you can peel off – more like makeup for me), but after hearing why he has them, I am starting to appreciate that their permanence can be special.

Michael will carry Big Break X with him forever – a memory not only burned into his brain, but his wrist as well. Ouch!…That’s another reason I prefer place and peel 🙂