Shocked to see Amber and Robbie go home tonight? Well join the club! 72% of Golf Channel viewers said they thought Amber and Robbie would win over Bernie and Haymes tonight, while only 28% thought Haymes and Bernie would head into next week’s finals.

Whew! I am exhausted. I was on the edge of my seat for the entire hour. Both teams deserved to be in the finals IMHO. But tonight, wierd stuff happened that surprised me.

Bernie wasn’t quite on her game until that shot over the water. Haymes, on the other hand, was hot – getting that shot out of the woods was really quite amazing. But his strategy was bang on – try and hit a tree and it will never happen – LOL!!! 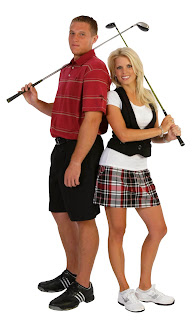 Amber was solid and consistent as ever (let’s ignore that bunker shot – it was not characteristic of her and really not a determining factor in the end), while Robbie had some bad luck or just pushed too hard when an easy stroke was really all that was needed. Did they “not win” tonight, or did they lose it for themselves. Let’s ask Amber…

You know…I think that the team dynamics were just a tiny bit off tonight for those two. Certainly the GC caught some of the dialogue and according to Amber, they got it right. Amazing what a little “lack of chemistry” can do to a team.

I was pleased to welcome back Andrea to the interviewee list today. She had a tough spell at Q school, but she’s a fighter and she’s got game, so I have no doubt that she’ll make it someday soon…

I was happy to catch up with Haymes today and get his thoughts on this week’s exciting show and what he and Bernie were going through.

Good luck next week Haymes! I sure hope to see you driving that BMW to your PGA event with your brother!

Sally had some great insights into this week’s show and good advice for match play teams. She knows what she’s talking about; just listen to hear who she got to play with. Very impressive!

Have you ever watched David “entertain”? Check out this video.

Remind me never to take an nap on a tee box with David around, no matter how slow pace of play is 😉

Michael was at a coaches’ convention in Las Vegas last week, but he was able to chat this weekend about the 10th episode and his take on two teams. I also had to ask if it was all work and no play in Sin City 🙂

Hmmm…sounds like the coaches really did do some good work in Vegas – funny, I’ve never had that experience and I’ve been to more conventions than I can count in that adult playground ;).

Only 2 more days to go to know who walks away (or should I say, drives away) with all those prizes. Who do you think/hope it will be?