Well, episode two for me was a big shocker tonight. I was looking at the Golf Channel website today, checking up on their latest poll and William was a very close second to Derek in the voting on who would win BB PEI. I won’t tell you how I voted, but William’s elimination came as a complete surprise for me.

I am not sure if it’s his good ole country boy demeanor that makes him so loveable, or maybe I see more of Boo Weekley in him than just his accent, but I thought William would be in for the long haul. I guess we all have “one of those days”, but Football didn’t seem to be comfortable in his own skin tonight. I am sure he can play better than that. 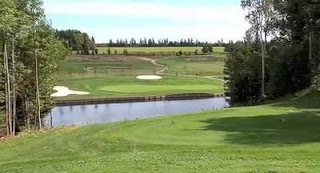 His comment about par 3’s being his nemesis was very telling. I wish I knew what was going through his mind when he heard that he would have to play 3 par threes against Brenda. How much did his mindset play in his elminition? All speculation, but something tells me that it must have been a lot.

Although we had some technical difficulties this week, William was a great sport about contacting me for his interview today. So many months later, I wanted to know if he was feeling like the windshield or the bug. And, of course, I was dying to ask where the nickname “Football” came from.

I sure hope William can land some sponsors. He deserves a chance to show his stuff. Hey Golf Channel, what about a reunion?

Next up is my interview with Brenda “What were you thinking with that 3” McLarnon. I love people like Brenda – no airs – no pretention – funny, self-deprecating humor – she’s just a hoot!

You just have to love that woman’s attitude! I wonder if any of the ladies on Big Break Ka’anapali would have shared their ‘lucky charm’ with their competitor in elimination challenge. Not likely! LOL!

Michael Michealides from Big Break X joined me again tonight to give his commentary on the show. Always great to hear from him because he’s “been there, done that” and knows how to critique a golf swing.

Derek wasn’t able to watch the show again this week, but he certainly remembers winning the $1,000. 🙂

Brian joined me today to share what he thought about episode 2 and his sound bites. He also sent a message to William that I really enjoyed.

For Blair, I wanted to ask her about 2-3-2 putt. It seemed like a strange decision given she just had to beat Kim who had made a 4.

I bet it was a crazy time out there for them all. Not at all like a regular golf game, I’m sure. I had trouble keeping track of all the scores, and I had a notepad!

Caught up with Nicole today and welcomed her to our weekly interviews. She is often considered the underdog in this show, but after listening to her, I think many people may be underestimating her…

Great to see Gerina bounce back from first episode gitters and win the $1,000 prize from Peak Vision…

Well, I’m not making any predictions about next week. I have been completely wrong two weeks in a row and not about to make it a triple. But it will be fun to watch, of that I have no doubt.