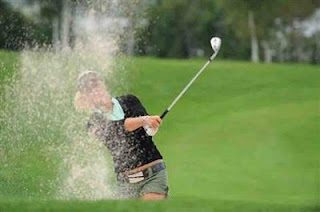 Well, this week’s Big Break PEI was chocked full of all the things we love about Big Breaks, and then some:

– Full of fast paced competition – they squeezed every minute out of that production with 13 different skill contests tonight.

– Full of sand – bunkers were a big part of this show and according to the players, these bunkers were overflowing with very soft sand. I wonder if Rodd Mill River is always like that. I’ll know on June 10th as I head off to play 3 rounds in PEI!

– Full of hilarious comments – from Brian’s comments about having the hots for Kim and how she and he had so much in common to Eugene’s stream of negative (and often comical) “You suck!” self-talk.

– Full of surprises – top picks go to Caroline’s rollercoaster bunker play or Gerina’s duckhook – which one surprised you the most?

But isn’t that what makes Big Break’s so much fun to watch? Armchair golf – ain’t nothing better than a good glass of red wine, spicy pizza and lots of Big Break suspence!

When I saw Aaron’s eyes in his interviews early in the show, I was sure he must be the one going home. Certainly he looked like he’d been crying (although he doesn’t look like someone who gets emotional).

But it was Caroline’s bunker play that was her detriment today- Or was it? I was thinking that maybe it was her slow play during the glass breaking. Her team started out ahead with Brenda breaking the glass first, but it came to a grinding stop when Caroline got up to hit her ball. I guess she forgot it was a race. It was like watching the tortoise and the hare, but this time, the hare won.

Well it looks like all my regulars are still with me this week, so let’s start with Brenda…

Should be interesting next week – Brenda looks like she’s in the middle of some drama. Haha…why does that not surprise me? 😉

Mike from BB X joined me tonight as well to give his commentary on the show as a past competitor. I love this picture of Mike with his Big Break “X” tatooed on his arm…now that’s commitment!

I also wondered what the distance was on those glass breaking shots – they did look a lot closer than the ones I remember on the other Big Breaks. I’ll have to ask Derek…he was there, but unfortunately (or fortunately) the “Think Green Guy” didn’t get to break the glass this week after winning immunity…

Nicole was full of commentary today about last night’s show, which I always love. She certainly has been underrated by the other players, but as we heard last night, “Those Wall Street people are tough!”.

Well, it looks like Nicole and Brenda are headed for a confrontation soon. Never any winners in these situations, but they do make for good TV 😉

Blair has certainly done well in these first 4 episodes. I wanted to find out how she felt being the winning captain and what her strategy was for the glass breaking competition.

It was a long, full and tiring day for Gerina on this episode. Considered one of the best players on the show, this week was no cakewalk for her, but she came through!

Brian wraps up this week’s interviews. I really wanted to tease him about his Kim comment – now I know what they have in common 🙂

I hope we see more of the banter between Derek and Brian next week – that was fun.

Well, we’re back to even-steven, men versus women. I wonder if we’ll see things flip now that the men have worked themselves back to all square. Poor Eugene, it must have been tough for him – two eliminations in 4 days. No wonder he’s talking to himself.