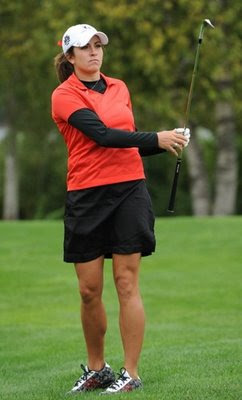 At one point during tonight’s show, Gerina was quoted as saying, “It’s anybody’s game.” And she was right.
But unfortunately, Gerina wasn’t anybody tonight.
Tonight’s episode saw some typical Gerina shots – smoking drives we’ve come to expect from this long bomber. But then we witnessed the unexpected – a 147 yard shot into a greenside bunker that was instrumental in her heading into elimination with Derek. Where did that come from?
It was an emotional show from start to finish with good friends having to compete for immunity (and $1,000 cash). Did you notice? No one was smiling tonight, except maybe Blair, who appeared to be playing a different game than the rest of them. Her solid play made me think that maybe she was still feeling the confidence boost from that 40 foot putt she had against Aaron in last week’s show. Whatever it was, I’d like to order two lbs of it please!
I had a chance to chat with Brenda tonight who found the show difficult to watch. Reliving that day was not a lot of fun for her, but Brenda is a real trooper and shared her thoughts about her competition with her good friend and how long it took to finally finish off that very difficult challenge (in more ways than one).
I also had a chance to talk with Michael Michealides, who was at Bethpage this week. He gave me some insights on Derek’s tee shots and what was probably going wrong with them. It was also interesting to here about his trip to the US Open venue with some of his “kids”.

They say that anything can happen in golf and certainly we saw that with the two arguably strongest players in the field heading into elimination. I caught up with Derek today to ask him about that whole day and how he was able to comeback after some pretty errant tee shots.

Here’s a picture of hole #7 that Derek and I talked about – it’s very cool – lots of different ways to play it – but all tricky! 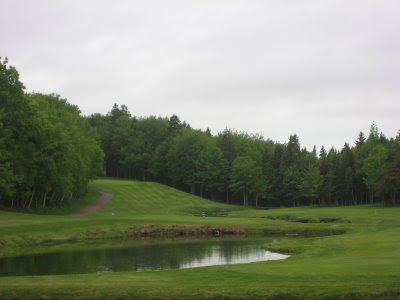 Later this week, I will post a link to my article from Inside Golf Magazine about my recent trip to Rodd Mill River where I had the most amazing time playing the Big Break PEI course and enjoying the wonderful hospitality of the Rodd Mill River Resort team.

I was fortunate to catch up with Gerina this AM as she was driving to Ohio for the Duramed Championship. Great to hear her speak so positively about her future…

Gerina may have been eliminated this week from Big Break PEI, but she won’t be easily forgotten. As the Golf Channel said in her bio, Gerina has a ton of talent and she will be somebody to watch for a very long time. I look forward to the day I can say, “Hey! I know that LPGA champion!” You go girl!

Just got off the phone with Blair, who’s having a very hectic week: first at the Women’s US Open qualifier with playing partner Michelle Wie (and some extra shhhh guests she wasn’t expecting). Now she’s in NY for the Men’s US Open and then on to the Duramed Championship in Ohio.

It will certainly be an interesting episode next week as the “thorn between two roses” or is it the other way around 🙂 battles for male supremacy. Blair won’t roll over that’s for sure, and something tells me that Brenda will want to avenge her friend’s elimination this week. I can’t wait!