Big Break Disney 1 – Ed couldn’t quite do it 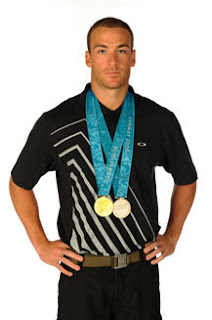 Finally, after months of waiting, Big Break Disney is finally here! Is it what you’ve been waiting for? I certainly found myself glued to the TV tonight. And as always, there were some surprises waiting for me. It was great that the Golf Channel started the competition off with some serious competition. That first immunity challenge was quite the opening, don’t you think? Here are my three thoughts on the first 20 minutes:

Ask Ed Moses…a two time Olympic medal winner (silver and gold in swimming). Look how he struggled. Now….Ed is obviously an amazing athlete, but that wasn’t enough to survive the first episode of Big Break Disney. For probably once in his life, “Ed couldn’t do it.” Golf is like that. Even the best can be beaten. It was hard to argue with Ed when he called himself, “one of the world’s greatest athletes”, even if it did rub me the wrong way, just a bit 😉 Yes, Ed Moses is a champion and that is something that he will always be, Big Break or no Big Break.

But what about the rest of the competitors? How did they feel about their first day and tonight’s rendition of that?

Well, I had the pleasure of chatting right after the show with Vincent Johnson. You may recall that Vincent was first recipient of the Charlie Sifford Exemption in 2009, which allowed him to play in PGA TOUR’s Northern Trust Open. Although he missed the cut by a smidgen, he obviously showed he has game and demonstrated that tonight for us with that amazing shot to the green from 192 yards with a 7 iron – Ouch! Let’s hear what Vincent thought of tonight’s show…

Next up, Kevin Erdman. Now, one might think Kevin likes to live on the edge, with his first episode ending him up in the elimination challenge. But I think maybe tonight’s scare might have resulted in Kevin’s A game showing itself just in time. I wonder what Kevin was thinking watching that tonight…

Caught up with Blake Moore (our Big Breaker with a temper, so he says) early this AM to find out how easy-peesy Big Breaks really are 😉

And speaking of an easy day, Tony Finau (who doesn’t want to be remembered just as Gipper’s big brother) joined me today to talk about that first and only shot of his and what happened after the first episode with one less Big Breaker at dinner.

Well, one down, 10 more to go! Looks like a great series. See you back here next week where the fun, drama and tension really get going!