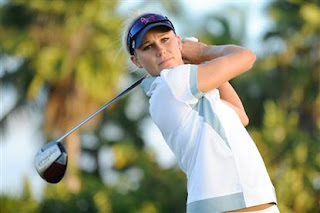 Lots of WOW moments on this week’s Big Break Sandals.

Wow, did you see Sara’s eagle!

Wow, check out Taryn’s amazing comeback 80 yard pitch to almost eagle out on that 479 yard par 5.

And WOW, did Ryann really get eliminated this week? Now THAT surprised me.

But in golf, even the best have bad days and it just wasn’t in the cards for Ryann this week. I will be at the Canadian Women’s Open this August and look forward to watching Ryann show her game there. She’s already qualified. I can’t wait to watch her in person.

They say that golf is a game of inches, but with Sara Brown, it’s a game of 1/2 inches. Imagine what it was like going from missing immunity by a 1/2 inch to holing an eagle to avoid final elimination. Wow…what a day that girl had!

Taryn also had a pretty down, down and then waaaay up day on the island. Sometimes you wonder where they get the energy to keep plugging. Well, it sure paid off this week for Taryn. Find out what she thought over that 80 yard wedge shot on the final elimination against Ryann.

Well, next week looks like lots of fun and nostalgic too with BB champions returning. It would be great to see them really go head to head with the new ladies. Until then…