This is the first time ever that I have invited a reader of this blog to contribute their thoughts on a Big Break series outside of normal comments, and I am so glad that I did.

In the last couple of weeks, I have enjoyed the comments from Bluefalcon from New York on my Big Break Sandals posts and believe his insights and commentary will add a lot to the finale epsiode.  So here’s his analysis of the two finalists… 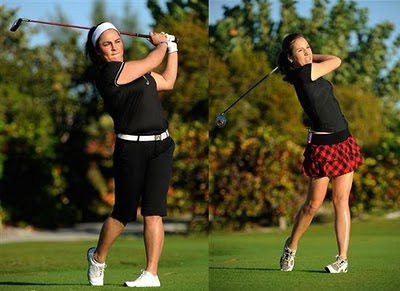 Lili Alvarez and Carling Coffing, dueling it out for the title and the largesse that comes with it.  Both are deserving of their spot in the finals; both have won immunity, both have gone to elimiations multiple times and both have come out intact. Now, however, only one with emerge victorious.  Below is a thumbnail sketch of both combatants.
Lili Alvarez.  Lili’s game can be summed up in three words; Pasion y Poder.  Passion and Power. Lili’s fiery demeanor serves her well on the golf course, she’s very much a player who plays with emotion.  Lili is long off the tee, longer than Carling, but she hasn’t been quite as consistent with the short irons and wedges as Carling has been.  There is also the Sword of Damacles that has been hanging over Lili from the beginning of this contest: one of the prizes on offer to the winner of the competiton, an exemption in the 2010 Lorena Ochoa Invitational.  Lili wants this badly, and at times, she has been distracted from the task at hand because of it.  One big key for Lili to win is staying in the moment. She’s gotten away with losing focus so far; with so much on the line now, Lili may not have the leeway to be distracted this time.
Carling Coffing. While Carling has done things that I have found royally irritating-the Birdie Dance, the stalking her fellow competitors after winning the Save/Send card-she has also done a lot of endearing things, not the least of which is playing well.  Carling isn’t as long as Lili off the tee, but she can hang.  What Carling does very well, however, is produce with her short irons and wedges. She’s been deadly all tournament with them. However, she has also made more mistakes than Lili has. But, Carling has one other advantage. She is not as emotionally attached to the prizes as Lili is. That could be very big in her favor.

Prediction:  I’m going to cop out and not make one.  There are simply too many variables-the course, the weather, motivation,handling pressure-to make a fair prediction.  However, whichever woman wins will be a deserving winner. All that’s left for me to say is play well and let the best woman win.

Hey,  I think that says it all (although I do like Carling’s birdie dance ;)).   Thank you so much Bluefalcon for setting tonight’s stage for us.

I guess we’ll know in just a few hours who wins BB Sandals.  Both women are already winners in my mind. It’s really down to who takes home the prize.  But whoever it is, she will deserve it!

Golfgal
Pamper yourself on Maui! Book your little piece of heaven in golfers’ paradise. Book now at http://www.vrbo.com/424659 and tell them Golfgal sent you!